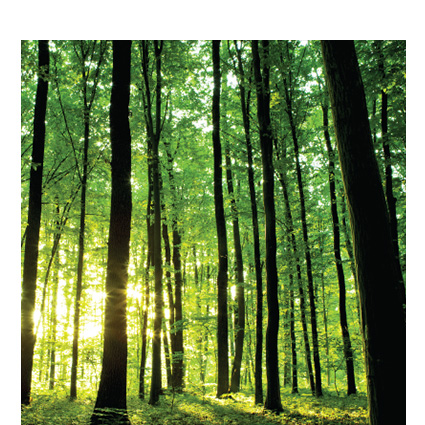 Every metric ton (mT) you purchase reduces greenhouse gases equivalent to a round trip flight from SFO to JFK or sequesters carbon from 3.8 acres of U.S. forest in one year, like Arcata! (source)

Carbon offsets purchased through TerraPass support our portfolio of projects in communities around the United States. View our portfolio and learn more about what our projects do.

A carbon offset is a certificate representing the reduction of one metric ton (2,205 lbs) of carbon dioxide emissions, the principal cause of climate change. Although complex in practice, carbon offsets are fairly simple in theory.

If you develop a project that reduces carbon dioxide emissions, every ton of emissions reduced results in the creation of one carbon offset. Project developers can then sell these offsets to finance their projects. There are hundreds of different types of carbon reduction projects. For example, a dairy farm can install an anaerobic digester to captures and destroys methane that would otherwise be released when animal manure decomposes. However, such anaerobic digester projects are typically expensive to install and maintain. In order to finance the construction and operation of a digester project, a dairy farm can sell the emission reductions in the form of carbon offsets.

Carbon offsets are therefore an available tool for individuals and organizations that wish to mitigate the impact of their own carbon footprint.

The natural history of Arcata’s Community Forest is redwood dominant forestland. Prior to European settlement, Arcata’s forestlands were used for hunting, fishing, and other uses by nearby Wiyot Native American settlements. Wiyot villages were settled adjacent to Arcata’s forest and throughout the vicinity of Humboldt Bay. When Europeans began to settle in the Humboldt Bay region in the 1850’s, native Wiyots were soon driven off their lands.

Lands within Arcata’s Community Forest were claimed through land patents and the initial logging began. Much of Arcata’s Community Forest was logged during the 1880’s. Trees were felled with axes, wedges, and crosscut saws. Large trees with defects and many smaller diameter trees were left following logging although they were usually consumed in the slash fires, which regularly occurred. No attempt was made to replant.
Following the logging of the Arcata’s Community Forest, the area was used for grazing and for water supply. It was not until the 1930-1940’s that the citizens of Arcata gained title to the Community Forest for the purpose of providing water to the town (Van Kirk 1985). By 1955, the Community Forest was dedicated as the first municipally owned forest in the State of California, and was to be “managed for the benefit of all citizens of the city, with attention to watershed, recreation, timber management, and other values” (Humboldt Times, May 15, 1955). By 1979, a voter approved Multiple Use Management Plan initiative was passed by Arcata citizens, which led the direction of the forest characteristics seen in Arcata’s forests today.

“Company” means Just Energy Advanced Solutions LLC dba terrapass. “Customer” or “you” means the person(s) or company whose order for the Goods is accepted by Company. “Goods” means any goods or services which Company is to supply to you.

All orders are accepted by Company subject to and according to the following terms which override and exclude any other terms stipulated, incorporated or referred to by you during any negotiations or in any course of dealing between Company and you.

All prices quoted include applicable sales taxes and levies in accordance with the law of Company’s jurisdiction. Delaware law governs these terms.

Company will provide reasonable proof of actions for all carbon offset purchases which demonstrate that the promised quantity of carbon emissions have been reduced/sequestered. This proof of actions will be available on terrapass.com and may include certification by a 3rd party.

When you purchase a subscription every month Company will bill you in the amount stated at the time of purchase using the payment method you specified. Subscriptions begin as soon as you have completed enrollment including payment confirmation. Subscriptions renew automatically each month unless you cancel the subscription. Company may change its pricing but subscription billings will not be changed without your permission. You may cancel subscriptions at any time by contacting Company.

Company will not be liable to you or be deemed to be in breach of these terms due to any delay in performing or any failure to perform any of Company’s obligations under these terms if the delay or failure was due to any cause beyond Company’s reasonable control (which include, but are not limited to government actions, war, fire, explosion, flood, acts of terrorism, import or export regulations or embargoes, labor disputes or inability to obtain or a delay in obtaining supplies of Goods or labor). Company may at its option delay the performance of or cancel the whole or any part of a purchase.

Terrapass RECs is a renewable energy certificate (REC) product and does not contain electricity. A REC represents the environmental benefits of 1 megawatt hour (MWh) of renewable energy that can be paired with electricity. For more information, see https://www.green-e.org/long-rec-disclosure.

TERRAPASS RECS IS SOLD IN BLOCKS OF 1000 KILOWATT-HOURS. IN 2019, TERRAPASS RECS WILL BE WILL MADE UP OF THE FOLLOWING RENEWABLE RESOURCES: