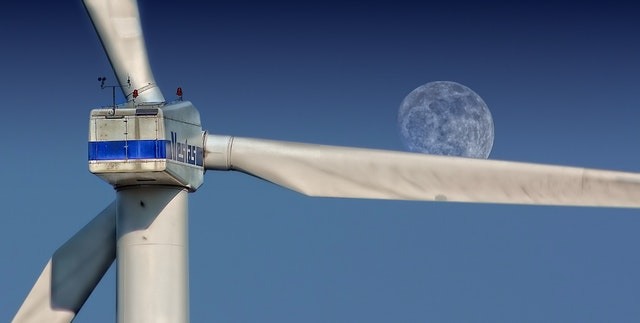 The image of a large wind turbine slowly rotating in the sun has long been the poster child of renewable energy – and a glimpse into a cleaner future.

And while wind farms were once a rare sight only found in specific locations, they’re now appearing in regions all over the world. In the race to reverse the effects of global warming, wind power is quickly becoming one of the most effective – not to mention cheapest – forms of green energy.

America is now the second-largest wind power producer – second only to China – with almost 112,000 megawatts of installed capacity. We now boast enough wind turbines to power more than 34 million homes and avoid 42 million cars’ worth of CO2 emissions. The monumental rise of wind power also heavily contributed to America using more renewable energy than coal in 2020 for the first time in 130 years.

But while turning wind into electricity seems like the perfect climate change solution, we still need a lot more progress if wind is to reach its potential not just as a dominant source of renewable energy – but energy in general.

So, to give you a clearer picture of what lies ahead, let’s take a closer look and find out what you need to know about the future of wind energy.

While most of us are familiar with seeing wind farms in open fields or coastal regions, there’s growing interest in maximizing generation by constructing giant turbines miles out in the middle of the ocean. Free from wind-blocking obstructions like buildings, trees, and hills, offshore turbines are generally much more efficient and productive than their land-based counterparts.

Eighty miles off the UK coast, construction has already started on the world’s largest offshore wind farm, the 3.6 gigawatt “Dogger Bank” project that will be rolled out in three separate phases. Construction will start in 2023, and when completed, the wind farm will be large enough to power around six million UK homes.

In the US, we’ve been slower than some other countries to embrace offshore wind, with the first project only coming online in 2016 off the coast of Rhode Island. Since then, interest in new projects has grown almost exponentially, with state procurement targets indicating we could see almost 30 gigawatts of offshore wind installed by 2035. With the vast coastal regions surrounding much of the country, the U.S. Department of Energy estimates that offshore wind could provide more than double our current energy demand.

With abundant wind resources and the booming investment in the sector, it looks as though offshore wind will play a critical role in America’s renewable energy transition – and set new standards that many other countries will seek to replicate.

2. Wind Turbines Will Keep Getting Larger and More Powerful

In the effort to generate more power (and profit) from each wind power generator, there’s something of an arms race going on between the world’s most prominent turbine manufacturers.

Energy company General Electric, which recently announced it would exit the coal power station business, has unveiled its new “Haliade-X” turbine, a 13-megawatt behemoth with a rotor diameter the size of two football fields. Currently being tested in Rotterdam, GE will use the new model in offshore wind farms and has already landed a substantial number of pre-orders.

Siemens Gamesa has gone a step further with a record-breaking turbine of its own, a 14-megawatt offshore model that can raise its output up to 15-megawatts with a unique “power boost” function.

Siemens has stated it plans to continue developing larger and larger models, and that ultimately, the ceiling of turbine size may be decided by economics rather than physics.

As Peter Esmann, Senior Product Manager, and Sidse Legaard Jensen, Commercial Product Manager at Siemens Gamesa put it, “Like with ships or aircraft, there comes a point where increasing size is not economically viable anymore. This however does not mean that turbine developments will then stop, but instead that the advances will likely focus even more on efficiency.”

3. Coal and Gas Are Losing the Price War

Not too long ago, wind farms were a much cleaner alternative to traditional power plants fueled by coal and natural gas – but they came at a substantially higher price. However, with the rapid acceleration of renewable energy in recent years, the cost of wind turbine energy is now cheaper than fossil fuels in many countries – and the price gap looks set to keep growing.

A report by the International Renewable Energy Agency (ARENA) found that in 2019, three-quarters of new onshore wind farms provided electricity at a lower cost than the cheapest new coal or gas power stations. IRENA also projects that between now and 2030, the prices of onshore and offshore wind farms could drop by a further 45% and 50%, respectively.

“By 2030, new utility-scale solar PV and onshore wind will be undercutting not only the cost of new fossil fuel fired projects by substantial margins, but will on average be cheaper than operating almost 1,700 GW of existing coal capacity.” Michael Taylor, IRENA

With new wind farms producing clean electricity at such a low cost, and coal generation continuing to drop by record amounts, it seems to be just a matter of time before wind power becomes one of the most dominant energy sources in America – if not the world.

4. The Industry Is One of Our Fastest-Growing Employers

In addition to providing clean, low-cost electricity, the wind industry is also expected to create thousands of new jobs as America strives towards net-zero emissions in the coming decades.

The wind sector already employs around 120,000 Americans, and the US Bureau of Labor Statistics expects the employment of wind turbine technicians to grow 61% over the next ten years, making it the second fastest growing job in the country. Wind technician jobs also pay an average annual salary of around $53,000 – more than $12,000 above the US national average.

5. A Simple Change Might Just Save Millions of Birds

When we hear discussions about the pros and cons of wind energy, one of the major objections is the threat that spinning blades present to bird populations. The US Fish and Wildlife Service estimates that wind turbines kill between 140,000 and 500,000 birds in America each year, and pose a significant threat to large birds with low birth rates such as eagles, hawks, and falcons.

But thankfully, a new discovery by the Norwegian Institute of Nature Research is generating some very promising results.

Following a multi-year trial, researchers found that painting one of the turbine’s three blades black reduced bird mortality rates by 70%, with the color change helping to reduce “motion smear” and giving birds more time to adjust their flight paths. And while the trial scope was relatively small, it provided a simple and practical method of reducing animal deaths without expensive changes to wind turbine manufacturing or operation.

And while we should note that wind farms kill far fewer birds than many other sources, it’s encouraging to see growing research into turbine safety – which will only help to accelerate the deployment of renewables around the country.

As wind power goes from strength to strength, there’s an increasing – and arguably, long overdue – focus on what should be done with the thousands of turbine blades and components that have reached the end of their usable life.

Around 85% of an existing wind energy generator can be recycled or reused, including copper, wires, steel, gears, and electrical components. But the blades themselves – which are made from special fiberglass to meet weight and strength requirements – are generally removed, cut into smaller pieces with industrial machinery, and stored or buried in the ground.

But thankfully, work is underway to put old turbine blades to much better use.

GE Renewable Energy recently announced a partnership with global waste management company Veolia to begin the first US wind turbine blade recycling program. Under the multi-year agreement, most of GE’s used blades will be shredded and used to make cement, replacing the need for coal and other virgin materials while reducing carbon dioxide emissions of cement production by 27%.

“Last summer we completed a trial using a GE blade, and we were very happy with the results. This fall we have processed more than 100 blades so far, and our customers have been very pleased with the product.” Bob Cappadona, Veolia North America Environmental Solutions

Many other turbine manufacturers are also experimenting with recyclable materials, including a new resin called Elium, which can be melted down and molded back into brand new blades.

Global wind turbine manufacturer Vestas has also announced an ambitious goal to develop blades that can be completely recycled and produce only “zero-waste” turbines by 2040. The company said within two years, it would announce a new circular strategy covering its entire design, production, service, and end-of-life process. Vestas CEO, Anders Vedel, made it clear he was committed to developing greener wind energy solutions, “If we are to spearhead the energy transition, we must be an example for doing so in the most sustainable way, and this involves making sustainability part of everything we do.”

The Future of Wind Looks Brighter Than Ever

With the rapid acceleration of wind generation in recent years, and the plummeting electricity costs that are now outpacing coal and gas, wind power looks set to become one of our primary energy sources over the coming decades.

If you would like to support wind farms, you can purchase Renewable Energy Credits (RECs) from the terrapass website, which encourage clean energy production while helping to construct and expand wind farms around America.

We’ve believed in the many benefits of wind energy for a very long time, and we’re encouraged by many of the exciting innovations in the sector. Wind power is clearly a great thing for our environment – as well as our economy.

In 2021 and beyond, we’re excited to see just how far wind power can take us in the fight against of global warming – and reduce our energy bills in the process.

← Prev: Are Carbon Offsets The Answer To The Climate Change Crisis? Next: How to Reduce Carbon Emissions in the Food & Beverage Industry →